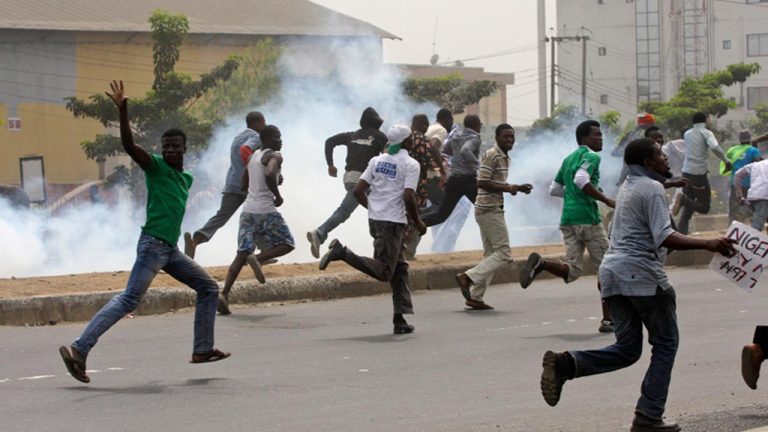 Riot in Plateau over planned installation of emir

There was palpable trepidation in Yelwa, a community in the Shendam Local Government Area of Plateau State as irate youths went on rampage over alleged plots to create an Emirate in the locality.

The area was thrown into a full blown melee on Friday over the allegation which is levelled against the Simon Lalong-led administration.

Plateau is predominantly Christian state with a long and frightful history of ethno-religious skirmishes.

A clutch of marauding youths, agitated by the rumours, stormed the palace of the traditional ruler, Long Goemai of Shendam, and vandalised it.

According to peoples gazette, Many shops and buildings were also looted in the riot.

The development was a topical issue among the locals, who took to community-focused Facebook pages, WhatsApp groups and other social media platforms, to lampoon the government.

Plangkat Milaham, socio-political commentator, posted: “Lalong plans to do something controversial. He leaks the information to test people’s reaction, so he can decide whether to go ahead or not. (politics 101).

The reaction he gets is very negative. He sends his boys to blame the opposition party & tag it “PDP propaganda”.

Posting on Twitter with the handle @yitkyim, a legal practitioner said: “So I’m hearing Lalong messed up (but it’s as usual if you know what I mean) one will expect that commissioner of information and press secretary would be having a tough time trying to come with a defense right? But no! I’m sure it’s ICT WhatsApp group brainstorming now.”

The government has, however, debunked the report, calling it the machination and imagination of mischief makers.

In a statement made available to Peoples Gazette by the Commissioner of Information and Communication, Dan Manjang, he urged citizens of the state to turn a deaf ear to the unfounded story.

“The Government wishes to put it on record that there has never been any time that such idea was contemplated or even discussed. To say the least, this is the imagination and machination of mischief makers aimed at throwing the State into the dark old days thereby drawing the hands of the clock backwards and making nonsense of the peace we have achieved since the coming of the rescue administration ably led by His Excellency, Rt. Hon. (Dr) Simon Bako Lalong, KSGG,” the statement read.

While relative normalcy has returned to Yelwa and environ, the government urged people to go about their normal business.

“Government hereby beckons on the general public particularly residents of Shendam Local Government to be circumspect and go about their normal duties by disregarding such dangerous rumours and providing timely information to security agencies to enable them act swiftly,” the statement added.