Kwankwaso reveals why he dumped PDP for APC

A former governor of Kano State, Senator Rabiu Musa Kwankwaso has disclosed why he resigned his membership of the opposition Peoples Democratic Party (PDP) to join the New Nigeria Peoples Party (NNPP).

Pampamnews had reported that Kankwaso, who was a presidential candidate in the 2019 elections, officially dumped the PDP on wednesday.

The former governor, who received his NNPP membership card from his ward chairman in Abuja, implored other well-meaning Nigerians to join his new party to take Nigeria out of the quagmire it’s currently enmeshed in.

Speaking while receiving the membership card of his new party, he attributed his actions to the crisis rocking the main opposition party.

He disclosed that the Party’s hierarchy did not consult him certain matters, especially those involving his state, and did see him as someone to reckon with.

He said, “We had a situation in April last year where zonal positions were being shared among the States and all leaders in the six other States were given the opportunity to nominate. But in Kano, some people felt I wasn’t that important, so they had to do what they did.

“That is what triggered the issue (defection) and I spent almost a year now waiting for the PDP to talk to me, even the new leadership, to come and talk to me; they didn’t want to talk to me.”

According to him, he felt there were irreconcilable differences between him and many other leaders of the party. 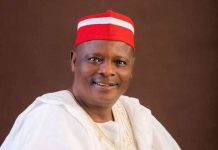