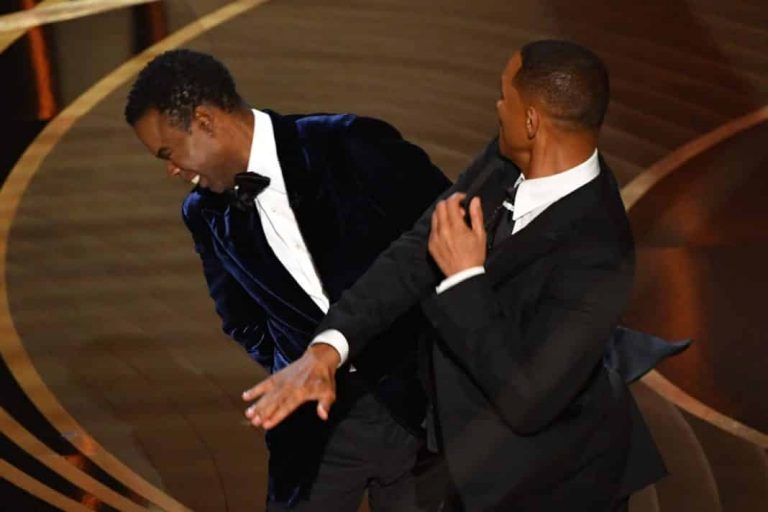 Pampamnews reports that one of the most petrifying and unpleasant moments in Oscars history and live television took place at Oscars 2022 when Will Smith stormed onstage and smacked presenter Chris Rock for a joke he made about Smith’s wife, Jada Pinkett Smith.

This online news platform understands that drama ensued while Rock was presenting best documentary during the 2022 ceremony. Rock made a Joke about Pinkett Smith getting ready to film a sequel to G.I. Jane — an apparent reference to the actress having a shaved head. (Pinkett Smith has been open about her hair loss due to alopecia.)

Smith laughed, though looking a bit uncomfortable. Pinkett Smith rolled her eyes and glared at Rock.

Hearing disapproval from the crowd, Rock implored, “That was a nice one!”

Apparently displeased with the joke, Will Smith stood up, gently walked to the stage, and smacked a stunned Rock in the face.

Though the unpleasant and ugly incident next was censored in the United States but aired elsewhere.

As Smith went back to his seat, Rock marveled, “Wow, wow … Will Smith just smacked the shit out of me.

“Keep my wife’s name out of your fucking mouth!” Smith roared, again seated in the audience.

“Wow dude, it was a G.I. Jane joke,” Rock said, which prompted Smith to repeat his demand

Disoriented, Rock paused for a moment and then told the crowd: “That was a — Greatest night in the history of television” and then continued along with his presenter moment.

Meanwhile, pampamnews reports that during the next commercial break, Smith was pulled aside and consoled by Denzel Washington and Tyler Perry, who admonished him to let it go. Smith appeared to wipe tears from his eyes as he sat back down with Pinkett Smith.

The next presenter, Sean Combs, addressed the stunning moment by saying, “I did not know that this year was gonna be the most exciting Oscars ever. OK, Will and Chris, we’re going to solve that like family at the Gold Party. But right now we’re moving on with love — everybody, make some noise!”