Pelumi Olajengbesi, a lawyer, has spoken on the release of Sunday Adeyemo, the Yoruba nation agitator better known as Sunday Igboho,

Olajengbesi on Saturday averred that the embattled separatist will soon regain his freedom.

Recall that Olajengbesi had in January announced his resignation from the legal team of Igboho.

Adeyemo has been incarcerated in Benin Republic since he was arrested at an airport in Cotonou by the country’s security forces while he was trying to flee to Germany in July 2021.

2023 Election: Buhari’s Choice for President Revealed — Not Tinubu Or Osinbajo

Subsequently, he fled Nigeria for Benin Republic after  the Nigerian government declared him wanted.

A Beninise court blocked the extradition of the freedom fighter to Nigeria while ruling that the activist be remanded in prison pending further hearing.

In Facebook post on Saturday, Olajengbesi extolled the bravery of Igboho, claiming that he has it on good authority that the Yoruba nation agitator will soon be released.

Olajengbesi also berated Yoruba leaders and implored them to work for common good.

He wrote: “Chief Sunday Igboho will be out very soon and there will be massive jubilation across the entire Yoruba land.

“He is no doubt a courageous man. This is very authoritative, just that our Yoruba leaders should stop being selfish and allow good to prevail.”

Igboho made headlines and became the subject of public discourse in early 2021 after he issued an eviction order to Fulanis in Igangan after the killing of some residents and razing of properties by suspected Fulani herdsman.

He was to piggyback on the acceptance of his move by preponderance of Yoruba to resuscitate and give vent to an ailing secessionist cause. 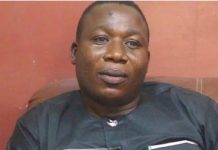 Buhari Govt Wants To Assasinate Me, Sunday Igboho Cries Out