States Controlled By PDP and APC after Edo Election has emerged.

PamPam News reports that the governor of Edo and candidate of the Peoples Democratic Party (PDP), Godwin Obaseki, defeated Osagie Ize-Iyamu, his APC rival, in the election 2020 governorship election.

However, after the defeat of Ize-Iyamu, PDP took over Edo state which was previously governed by the All Progressives Congress (APC), Nigeria’s ruling party.

There are 36 states in Nigeria. The country operates a multi-party electoral system however, currently, two major political parties are dominating the political landscape in the West African country.

PDP now controls sixteen (16) states in Nigeria after Saturday’s election in Edo State, while the APC controls nineteen (19). The only state not controlled by any of the two parties in the country is Anambra State, which is governed by the All Progressives Grand Alliance (APGA).

Breakdown of states controlled by the PDP and APC. 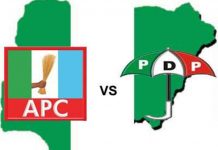