The governor of Edo State, southern Nigeria, Godwin Obaseki, has alleged that President Muhammadu Buhari has directed the state chapter of the All Progressives Congress (APC) to sanction Adams Oshiomhole, the National Chairman of the ruling party.

PamPam News reports that Obaseki made this claim while speaking at a rally in Owan East and West Local Government Areas in Sabogida-Ora on Thursday.

Governor Obaseki and Adams Oshiomhole had been at loggerheads over the running of the state chapter of the APC. Rival factions loyal to the APC chieftains had on November 12 suspended Oshiomhole and Obaseki.

Speaking on Thursday, Obaseki insisted that Oshiomhole is not a member of the party.

His words: “The APC is one party. Those that say they are in the EPM are not APC, including their national chairman, who we have suspended in Edo State. Those mistakenly elected into Edo State House of Assembly, who are members of the EPM, have been thrown out and the Independent National Electoral Commission is aware and will soon announce a date for a fresh election, where we will have opportunity to elect credible representatives, who will represent us in the House.

“Any person doing anti-party activities, President Muhammadu Buhari has asked us to deal with them. We have been told to go back to organise our party. That’s why we are here. As a ruling party in the state, we have done a lot for the Edo people, moving the state forward progressively, but the EPM are afraid of progress and will do anything to ensure we don’t get another term,” he added. 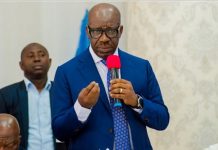 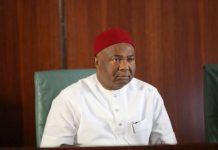