Sadiya Farouq, the Minister of Humanitarian Affairs, Disaster Management and Social Development, who was rumoured to be President Muhammadu Buhari’s second wife, has been placed under close monitoring by the Presidency.

PamPam News learned that “Buhari rumoured wife” was placed under close supervision as part of efforts by the federal government to supervise developments within the N-Power scheme which is directly under the supervision of her ministry.

According to reports, the minister was reprimanded by the Presidency for alleged excessive use of power, abuse of office and employment of staff beyond the financial capacity of her ministry.

“The Presidency was ‘shocked’ to learn of how she runs the affairs of the ministry and sent a senior officer to call her to order.”

“She is technically servicing the emolument and allowances of the aides through funds of the agency, since she is unable to get approval of parliament of executive for such unprecedented number of aides.

“These are way far beyond any other official of government except the President,” Sahara Reporters quoted inside presidency sources to have revealed.

PamPam News learned that the Minister when confronted with the allegations, however, denied such acts, claiming that the individuals “only chose to address themselves by the appellation and it wasn’t with her blessing”.

The development is coming months after Farouq was rumoured to have been picked as a second wife by President Buhari. The rumoured wedding between the President and the minister did not see the light of the day.

Troubled Abba Kyari Reveals Those Behind His Ordeal 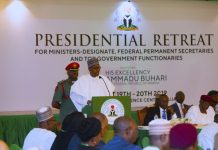